Pat Rideout knows she isn’t a great artist, yet every few weeks, she finds herself inside Studio 1 at the Birmingham Bloomfield Art Center.

“If it was ever going to be judged, [my paintings] would probably be one of the least artistic, but it doesn’t matter,” she said. “You concentrate on something other than problems in your life.”

Every other week or so for the last year, Rideout has been sitting at one of the tables in the studio, talking with people who really, truly, understand what she’s going through while tackling the art project in front of her as part of the BBAC’s free Art of Caregiving program.

The program, a series of art workshops designed for those caring for the elderly—which may or may not include someone with Alzheimer’s and/or dementia—serves as a therapy session and support group for the participants, including Rideout, whose husband, John, suffers from Alzheimer’s. 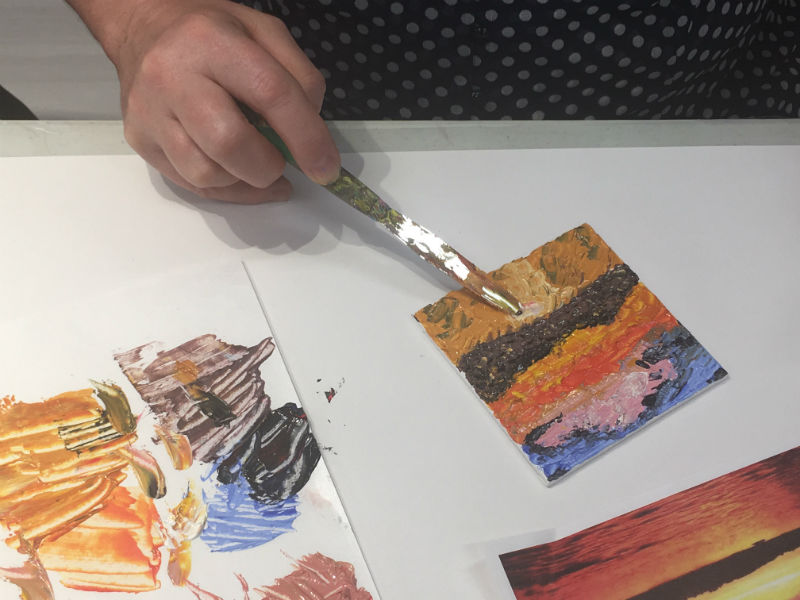 While Rideout participates in Art of Caregiving, her husband John has been rather vocal at Meet Me @ the BBAC, a program geared towards individuals living with Alzheimer’s and dementia, which costs $10 for both participants.

While the Rideouts have only been to a few sessions, Pat said that John, who is a relatively shy man—and now more than ever—came alive at them, which has never happened at anything they’ve done in class form since his diagnosis.

In both of these workshops, there is no wrong way to discuss the artwork. No one’s opinion is judged or considered “wrong.” Each session starts with participants discussing two paintings, often led by BBAC President & CEO, Annie VanGelderen. Then they go into Studio 1, which is specifically designed for those who are cognitively, emotionally and/or physically challenged, to work on a project in response to their discussion.

“He wants to go back,” Rideout said. “And he asks every couple days, when are we going? That’s the only program, not just art, anything, that he’s ever been that interested in.” 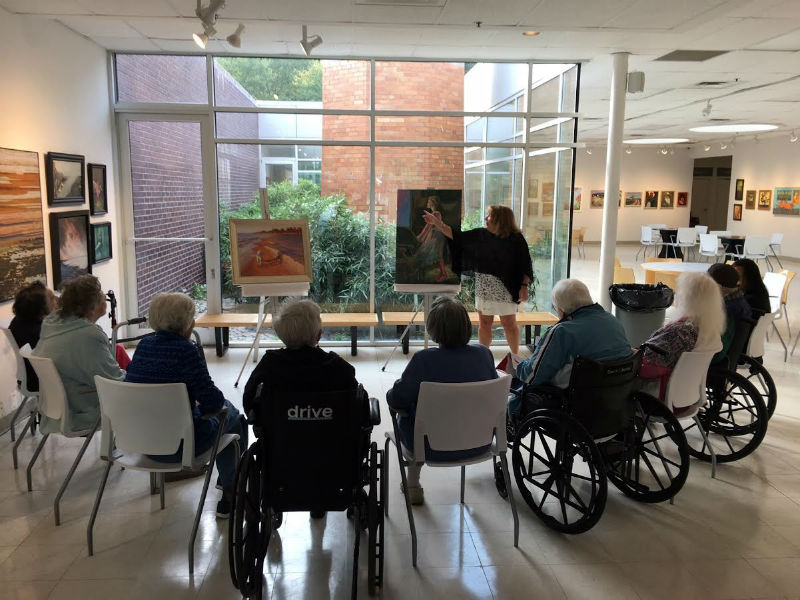 The Rideouts aren’t the only ones enjoying the BBAC’s Art of Caregiving and Meet Me @ the BBAC. In fact, the programs have grown fast and furious since their inceptions, according to VanGelderen. The BBAC hopes the programs will grow and they will eventually be able to share their knowledge with fellow art centers all over the United States.

With the vision statement “art for all,” the art center decided to really live up to that after a strategic planning session a number of years ago. They wanted to create programs that would allow anyone with cognitive, emotional or physical challenges to participate in the visual arts.

“As we did more and more programming for a number of individuals, we were seeing a lot of seniors with Alzheimer’s,” VanGelderen noted.

Around this time, the BBAC also became aware of the groundbreaking program at the Museum of Modern Art in New York, Meet Me at MoMA, which Meet Me @ the BBAC is based off of.

After going back and forth with MoMA for about a year to see if there was a way to bring the program to Michigan, in 2013, the BBAC held two days of training for staff and volunteers with a member of the MoMA staff. The BBAC then became one of the first art centers in the country to replicate the program and immediately partnered with the Alzheimer’s Association of Michigan, who helps them determine which participant should be in the early stage Alzheimer’s group and which should be in the mid-stage.

Now, the program typically runs twice a month and is still one of VanGelderen’s favorite parts of her week.

“I find that that half hour out of my week is truly what this is about,” she said. “You can be an administrator for an organization and yes, you have to deal with bills and infrastructure and contracts, but when I am conducting one of these art looking programs for Meet Me, it reminds me back to the core of why we are here.”

The Meet Me @ the BBAC program also inspired the Art of Caregiving. VanGelderen said they noticed that the care partners were also getting great relief and joy from those sessions.

The staff then thought about providing a program for them, or anyone taking care of an elderly person. Enter the Art of Caregiving, which had a two-year development process, and is free to participate in.

It’s not only the art component mentioned above, but there’s also 15 to 20 minutes of socializing at the beginning of each program.

“That is important because when you are a caregiver, you sometimes feel very isolated,” VanGelderen said.

Each week is focused around a different visual medium, but every Art of Caregiving participant gets a package, which includes a journal. The idea is that participants are learning new art skills and are encouraged to do whatever they want in the journal. They don’t have to write all about their feelings.

At the end of each class, everyone is given a package to take home to replicate the project they just created. VanGelderen said she often finds herself getting show-and-tells every week from those who went home and did the projects with those they take care of.

“Most are intimidated in the very beginning because when you think about art in a studio you get a little nervous…the most common phrase is, ‘I’m not good at art,’” VanGelderen said. “Everyone can learn art.”

Art can sometimes trigger something in participants in both programs as well, like in one of the very early Meet Me @ the BBAC programs.

There was a group from a memory care facility there, which included one woman with early onset Alzheimer’s, probably in her 40s.

In the middle of the art looking component, the woman spoke up and talked a bit, causing everyone to stop and look at her. Since VanGelderen was the facilitator, she hadn’t really noticed, but after class, the woman’s husband and paid caregiver approached Annie. They told her that was the first time the woman had spoken in three months. She had become non-verbal.

“Something in that art talk stimulated her to have a voice,” VanGelderen said. “They were in tears, I was in tears. It was a bit of an emotional breakthrough.

“If you have one of those once in your lifetime, it’s rewarding, but we keep getting more and more of those,” she continued. “We’re touching so many lives that every day is a rewarding experience.”