Out and About: Elton Monroy Durán

Out and About: Elton Monroy Durán

As a part of Watch This Space, CultureSource has commissioned 4 artists based in Southeast Michigan to highlight their favorite works of public art, to encourage you to get offline, go outside, and see for yourself. Last but not least, artist Elton Monroy Durán!

This public art adventure tour is designed to be fun, relaxing and exploratory for you, your friends and/or family. Each site was selected not just for its aesthetic appeal and cultural significance, but also for the surrounding interesting sights to see in Southwest Detroit.

We believe it is special these days to have an outing that is isn’t necessary to spend money, but rather, just appreciate the journey. Enjoy the company you are with or the solitude, and the wonderful places around us and people along the way. At the same time, we will forewarn you that some of these locations are nearby local ice cream shops, places to get food, panaderias, and more! So you may also want some treats along the way, but not mandatory… 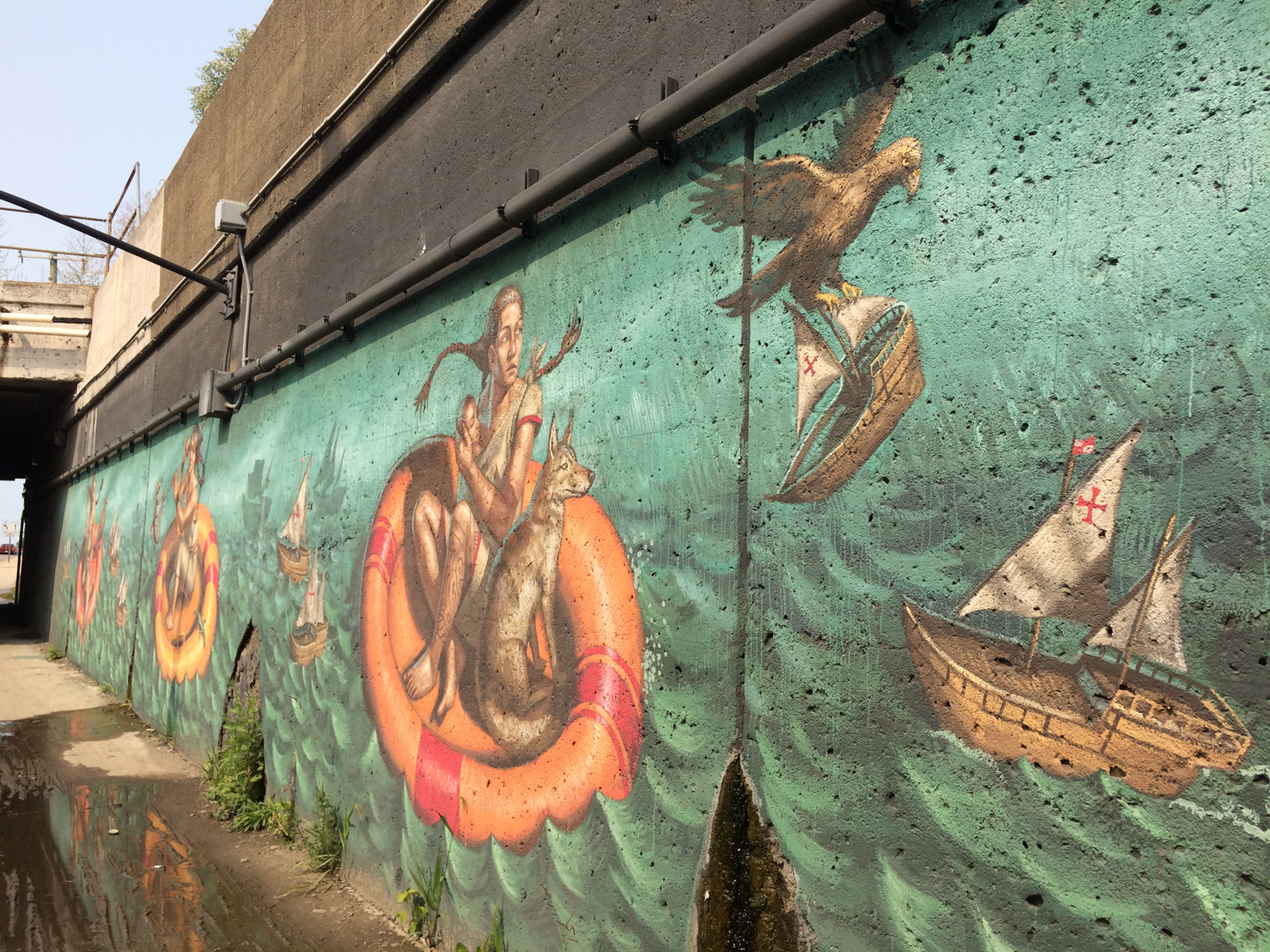 This mural is done by, in my opinion, one of the most remarkable muralists in Detroit. What I like about this mural is how Bernal Perez mixes the elements of Native Americans and life rafts that rescue people. He empowers the Native Americans in this very surrealistic composition. The location is also very interesting because it is an extremely noisy, dirty viaduct with an almost violent atmosphere where large semi trucks pass by quickly below and trains pass above, and there is often flooding in the street and water running down the walls. 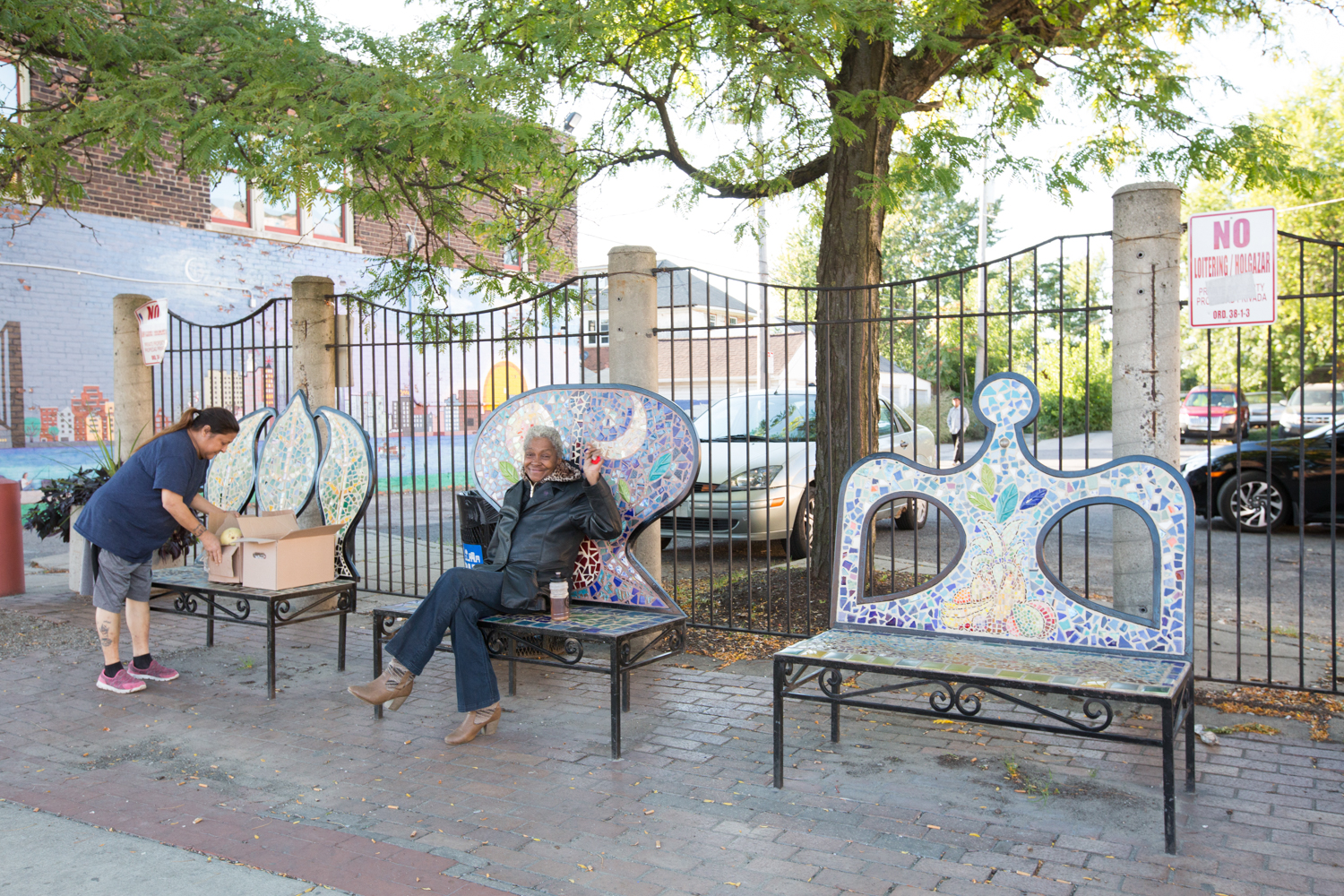 These well-loved and beautiful mosaic benches create a comforting and peaceful space where people can feel secure and at home in a public space. It is actually rare that these benches are seen empty. Folks on the block are always seen relaxing and enjoying here. Laredo Herbeck has incorporated elements of the Latino culture in the mosaics to refelct the largely-Latino population of the neighborhood. To me, the benches seem like angels.

This is one of my own murals that I’m especially proud of. It is inspired by the yearly Cinco de Mayo parades in Southwest Detroit. Everyone comes out and celebrates together along Vernor street. It depicts some of the popular characters you can see in the parades, from folklorico dancers to lowrider cars and bikes, mariachis, and even some specific well-known mariachis in Southwest Detroit ride on the back of a bright red vintage Ford, driven by the original founder of E and L Meats (the grandfather of the current owners). The mural was painted with the help of many people in the community during a community “Painting Party” at the beginning stages of the mural. The owners of the wall and parking lot– Hacienda Mexican Foods and E and L Supermercado– are really wonderful people, welcoming and warm to everyone in the neighborhood. 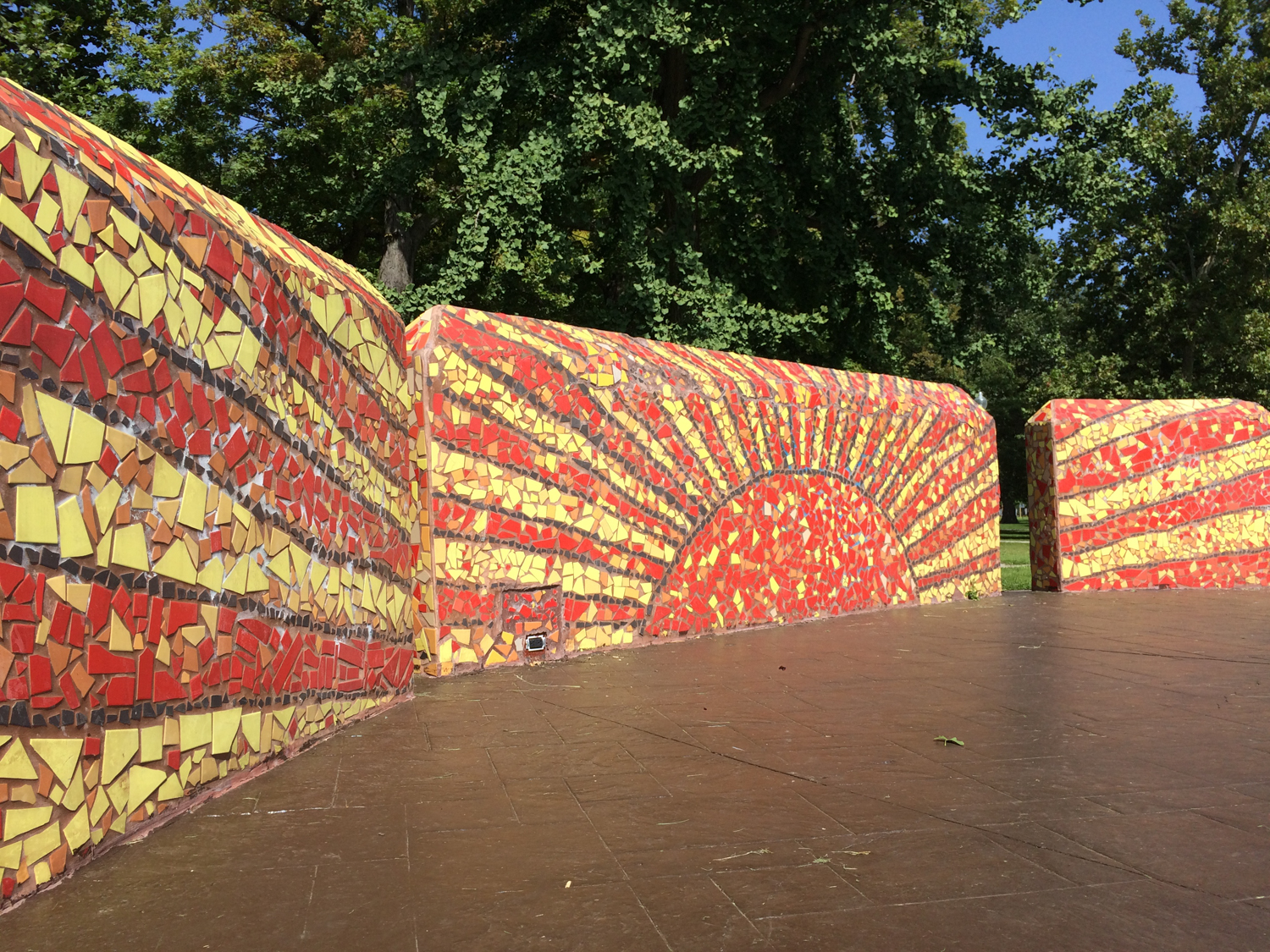 This mosaic backdrop to the stage at the Clark Park Amphitheater creates a bright, colorful place for community gatherings and performances. This is another really well-used public art piece. There are countless events that take place around this artwork, especially in the warm season, and when we went to photograph it, there was a young man practicing his dances there. 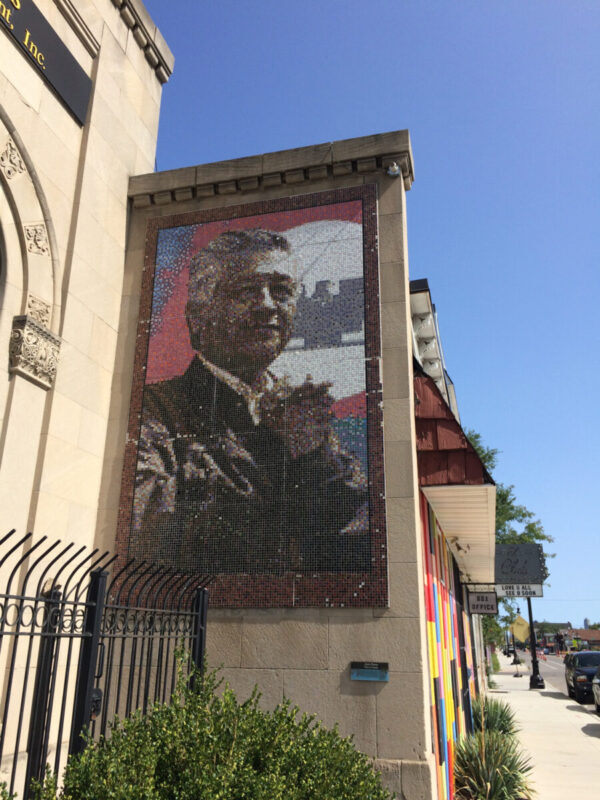 This mosaic portraying Cesar Chavez stands out to me. It is so well done, that it integrates completely with the building and surroundings. It is especially interesting because Luevanos is also a photographer, and you can see the photographic influences in the art piece as well. 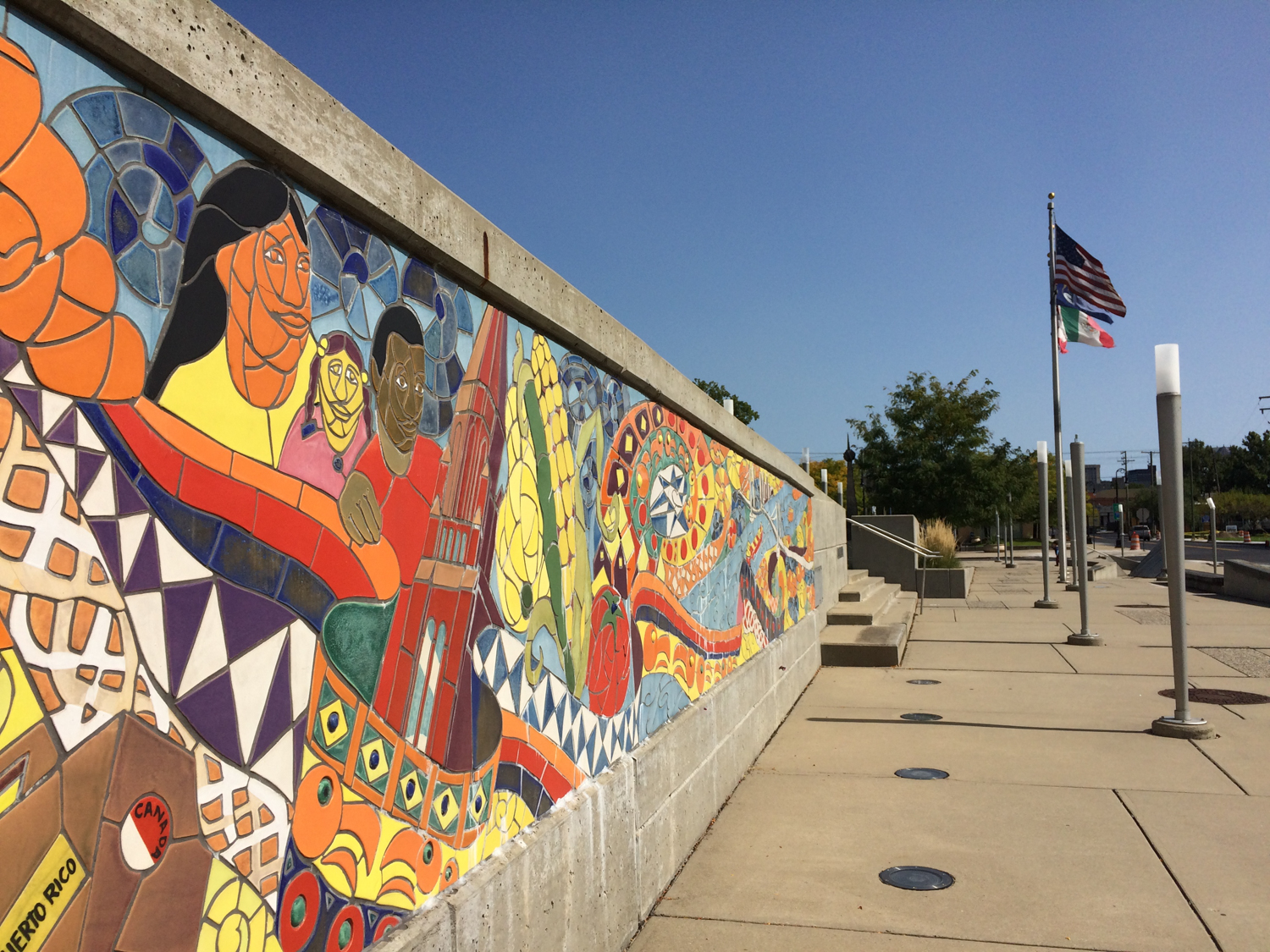 Massey is an accomplished muralist, but I like his decision to use mosaic for this piece because it is reminiscent of the Latino mosaics that are very common throughout Mexico. It is a landscape with the bridges and the river, but he also incorporates diverse elements representative of Detroit and of the Latino culture particularly in Southwest Detroit, such as including the corn and the names of different Latino countries. 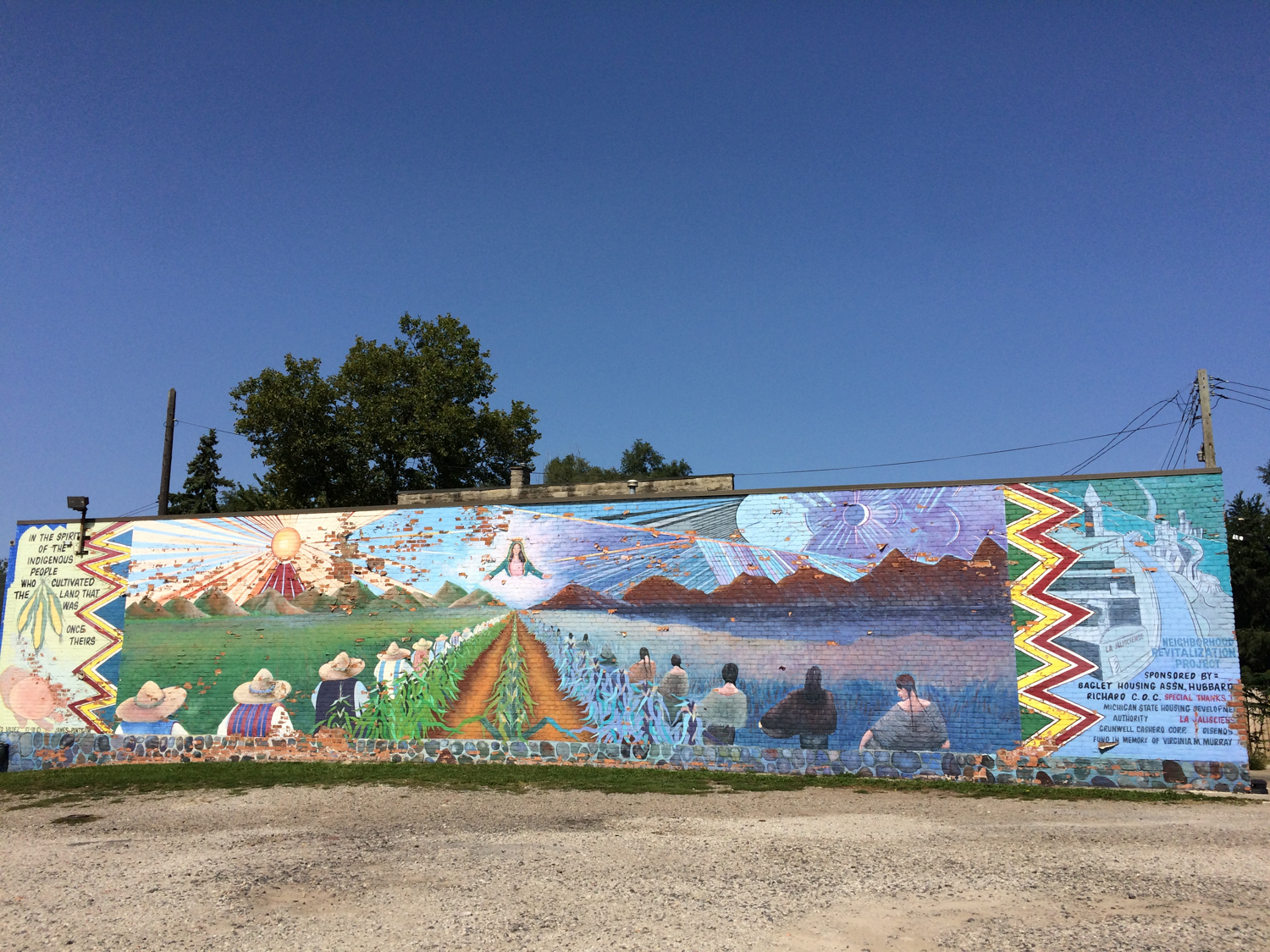 This mural is iconic in Southwest Detroit, done by a well-known artist in the community. It reminds me of the immigrant’s journey because the men and women  are traveling far into the distance to a point where we cannot see. There seem to be two different fields– as if there are two places progressing separate but parallel to each other at the same time, and along the way, La Virgen is guiding them

This is another of my own murals that I think is especially significant. It includes portraits of over 50 members in the community—past and present– who helped make Southwest Detroit the place it is today. The mural depicts a parade with dancers celebrating, famous icons from Latino popular culture (such as musicians, actors and actresses), along with Frida Kahlo and Diego Rivera looking on from above. The way that I designed the composition reunifies the two parts of Bagley street that were split when I-75 was constructed, making it appear as if the street were one again. 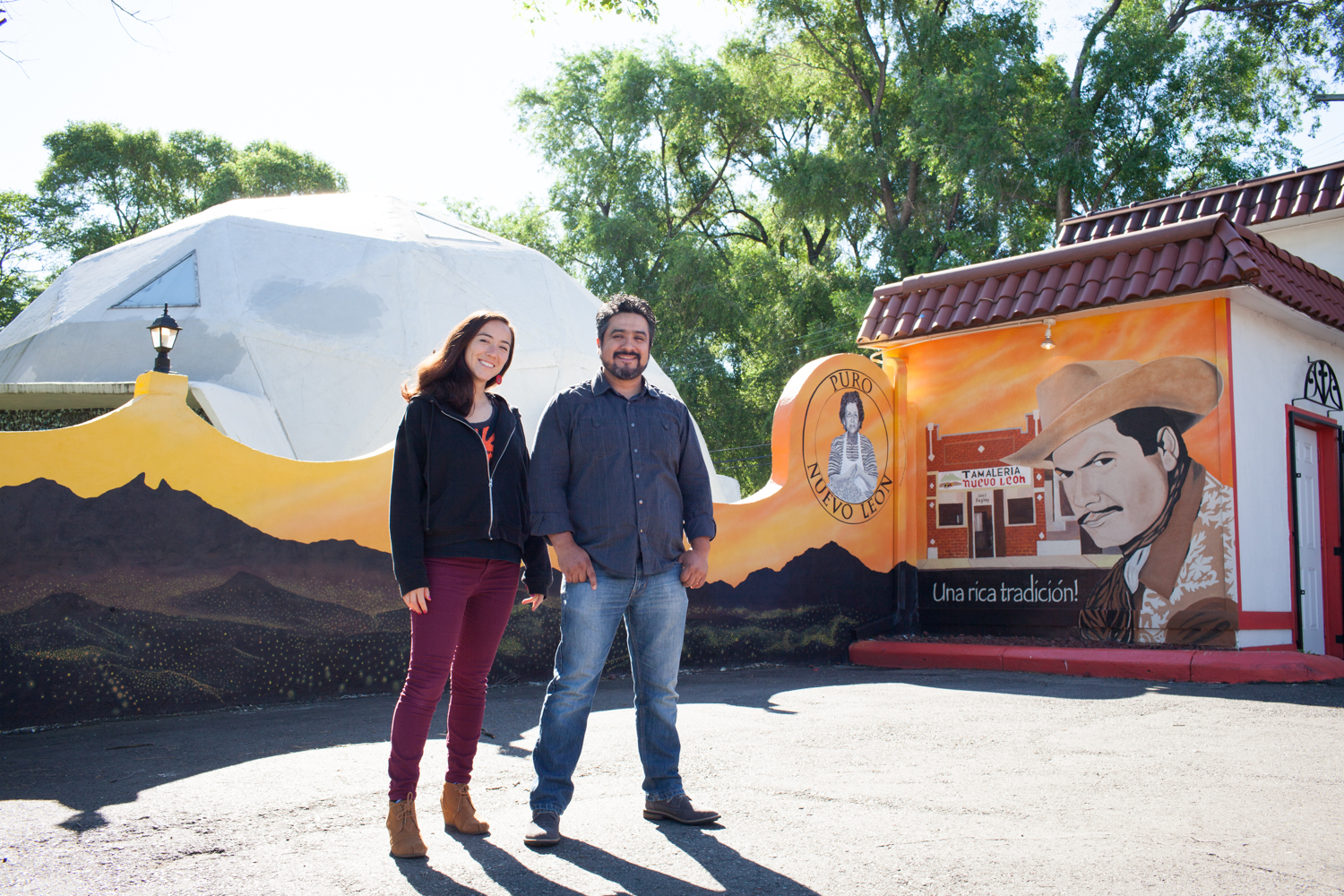 Elton Monroy Durán is a Detroit-based visual artist most known for his murals in Southwest Detroit and throughout Michigan. He describes himself as a humanist artist with scientific and sociological approaches, which he seeks to convey through his work. Monroy Durán started the mural and art company Corpus Art Inc. in Detroit in 2016. If you are interested in knowing more about Elton, or seeing some of his murals, you can always visit Southwest Detroit and take a mural tour with the artist himself, which can booked through his website or Facebook page.

Project Manager of Corpus Art Inc.
Julianne helped to compile and document this list and manages other projects affiliated with Corpus Art Inc. and Elton’s work